How many Americans does the government cover?

According to the Census Bureau, Medicare and Medicaid are the largest programs, followed by the military health care system. Altogether, government programs insured about 95 million Americans in 2010, or 31% of the population.

What’s the difference between Medicare and Medicaid?

In general, Medicare is for seniors of any income level, while Medicaid is for low-income Americans. Low-income seniors who qualify for both programs are known as “dual eligibles.”

Medicaid. Medicaid covers poor Americans and includes “CHIP,” a separate program for children. Unlike Medicare, Medicaid is a federal and state program, which means states have different criteria for who qualifies. Every state must, however, cover: (1) pregnant women eligible for welfare; (2) low-income seniors and children under 18; and (3) blind or disabled people who get Supplemental Security Income (SSI) benefits. In general, a beneficiary’s income can’t exceed 133% of the federal poverty line (although states can choose to be more generous).

What about military health care?

TRICARE. TRICARE is run by the Department of Defense and is the managed health care program covering active service members, retirees and members of the National Guard.

VA/CHAMPVA. Run by the Veterans Administration, these programs offer direct medical care (rather than health insurance). While beneficiaries have traditionally been service-disabled veterans, any veteran may receive care at the VA’s hospitals, and the program is an important safety-net for low-income vets. CHAMPVA offers access to VA facilities for spouses and children of disabled or deceased veterans. 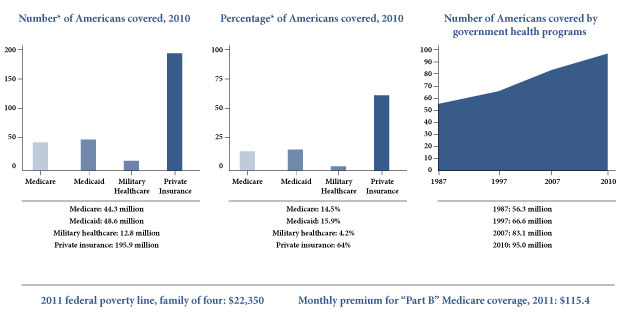